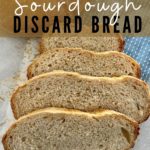 Sourdough discard slow cooker bread is a great way to bake sourdough bread without turning on the oven and heating up the house.

I have chosen to make this recipe with sourdough discard but you can use active, bubbly sourdough starter too. I've included instructions for this further down.

I refer to a slow cooker in this post, however you may know it as a crock pot.

Why Use A Slow Cooker For Sourdough Bread?

But when it's hot, you don't want to make things hotter by cranking up the oven.

However, if you really want sourdough bread in the height of summer, without the extra heat from the oven, this can be a good option. It's also handy if your oven is out of action or you're renovating the kitchen (which is how I came to discover this technique).

What Size Slow Cooker Should You Use For Sourdough Bread?

You can scale the bread up or down using baker's math if you need to.

This can depend on your slow cooker and how hot it gets.

I find that the crust on my slow cooker sourdough bread is quite good and no one would really know that I cooked it in the slow cooker if I didn't tell them.

I bake the slow cooker sourdough discard bread on high for 2.5 hours. My slow cooker gets quite hot, so it does give me a nice crust.

You need to bake the bread for a minimum 2 hours but I do recommend 2.5 hours for a nice crust. You could go longer if your slow cooker doesn't get very hot.

If you want to make the crust extra crunchy, you can grill it or place it in the oven once it's cooked, just to crisp it up. But this defeats the purpose of not turning on the oven. But, as always, the option is there if you need it (or if your slow cooker really doesn't heat up too much).

What Flour Is Best For Slow Cooker Sourdough Bread?

As with sourdough bread, you can really use whatever flour you have on hand. Bread flour is always best, but it can be a good idea to use a little whole grain flour in this crock pot sourdough.

A little whole grain flour will give the bread the color that it lacks from not being cooked a high heat. The caramelisation of the crust is quite slow for this bake and you might think that it's never going to happen.

I find that the crust starts to brown up at around 90 minutes into the bake. This will depend on your slow cooker.

A little diastatic malt powder could also be used.

It really is pretty easy to make this sourdough slow cooker bread. I have chosen to make this bread using discard and a little yeast.

If you prefer to lose the yeast, then you can most certainly still use this recipe, just increase the rising time to suit your sourdough starter. The process is the same regardless, it's just the timing that changes.

While this is a relatively simple process, here are my tips for getting the best from your sourdough discard slow cooker bread.

You can use either discard with some commercial yeast or active starter for this recipe.

Just remember that the timing of the recipe will change if you use active starter - you'll need to extend the rising time (bulk fermentation) to accomodate your sourdough starter.

The amount of discard or active starter stays the same.

What can you use instead of a Dutch Oven to bake sourdough bread?

Can you prove sourdough bread in a slow cooker?

If your slow cooker has a low enough heat setting, you could ferment and / or proof the bread in the slow cooker. You would need to be careful to ensure that it does not get too hot though as this will ultimately damage your wild yeast. You could also keep your sourdough starter warm in a slow cooker. I wouldn't actually turn it on though - just use some wheat packs or a jar of boiling water inside the slow cooker - turned off. This will keep your starter happy.

Will sourdough bread baked in a slow cooker get a crunchy crust?

Slow cooker sourdough bread will not get a crunchy crust like it does in the oven, but it will get semi crunchy. Adding the dish towel under the lid for the second hour of cooking certainly helps to ensure the crust is not too soft at the end of cooking time. I find leaving the bread for a little longer does help with the crust and you will get a nice crunch - it just won't be the same as a traditional sourdough bread.

Can I add flavors to sourdough discard slow cooker bread?

You could, however you would need to experiment as the slow cooker does not cook your bread like a conventional oven. I tend to stick to basic flour, water and salt for slow cooker bread, but feel free to experiment.

This recipe is based on my Sourdough Pane Di Casa Bread recipe. You'll see that the quantities in the recipe are very similar. 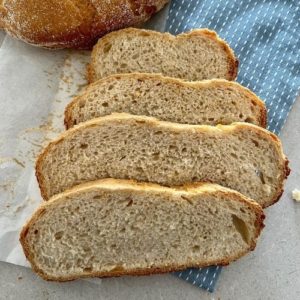 Using a Stand Mixer - this recipe is definitely suited to using a stand mixer. Depending on the strength of your mixer, it may take just minutes for the dough to be kneaded. Use the stand mixer instead of pulling the dough into a ball (stretch and folds). Thermomix - this recipe is definitely suited to a Thermomix. I knead for 30 seconds to form the rough dough, let it sit for 30 minutes then knead for 3 minutes using the dough function. This is ample time for the dough to be smooth and pulling away from the sides of the bowl. Amounts of Flour - I have used 450g of bread flour and 50g of whole wheat flour. If you feel the dough is too wet when you are stretching and folding, it's fine to add up to 50g more flour (I'd use whole wheat). You don't want this dough to be too wet or you won't be able to shape it tightly enough. Types of Flour - You can use all bread flour if you wish, but I found using all bread flour with no whole wheat made the cooked loaf quite pale. Discard or Active Starter - You can use either discard with some commercial yeast or active starter for this recipe.Just remember that the timing of the recipe will change if you use active starter - you'll need to extend the rising time (bulk fermentation) to accomodate your sourdough starter.