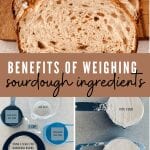 The benefits of weighing sourdough ingredients cannot be ignored.

Why is it better to weigh your sourdough ingredients, rather than use cups ad spoons?

This is a question I often get asked, particularly when people are not used to using a scale (or if they ask for a cup/spoon conversion of my simple sourdough recipe).

Here are the benefits of weighing sourdough ingredients rather than measuring by volume.

Cups/Spoons Are Not Universal Measures

Why? Because your cup may be bigger or smaller than mine. You might not level it off at the same spot. Your flour will be different to mine. You might also not pack it as tightly as I do. There are just too many variables.

I did a little experiment using two different one cup measures. I wanted to find out exactly how accurate cups are. The results might actually surprise you!

The photo above shows the amount of flour and water held in each cup in grams. There's a noticeable difference between them all.

That could definitely cause issues when making sourdough - too much water or too much flour will have detrimental effects to the dough and change the desired outcomes.

You can see the blue and grey cups in the photo. Just by looking at them, you can see that they are different sizes, even though they are both marked as being "1 CUP" and 250mls!

First I measured water (as well as against a liquid jug) and then I measured flour.

You can see from these results that the cups are very different. Imagine if you were using the blue cup, while I had written my recipe using the grey cup. Can you see how inconsistent that would be?

Here is a list of benefits to using a scale when preparing your sourdough bread, rather than volume measures like cups and spoons.

If you are looking to invest in a good set of scales for your sourdough baking endeavours, these are the two that I would recommend.

Baker's Math Kitchen Scale - This heavy duty digital scale allows you to calculate baker's math percentages while weighing your ingredients. It has a huge 8000g capacity - perfect if you're baking a big batch!

OXO Good Grips Pull Out Display Scale - this scale features accurate 1g increments and has a handy pull out display meaning you can see it, even with a large bowl sitting on the scales.

If you enjoyed this article on the benefits of weighing sourdough ingredients, you might enjoy these ideas: