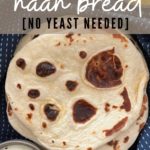 A good sourdough naan recipe is an essential in any kitchen - especially if you love to eat curries.

Soft, pliable and chewy is the best way to describe these tender sourdough naan breads. A lovely flavor imparted by your sourdough starter and the greek yogurt used in the mix too.

What is Sourdough Naan Bread?

Naan bread is a type of bread flat bread that originates from India and Asia.

It generally has yogurt as an ingredient and is leavened with yeast or baking soda.

You'll find it on the menu in many Indian restaurants. Often it's flavored with garlic and cheese or topped with coriander or Nigella seeds.

In traditional Indian cooking, naan breads are slapped onto the inside of Tandoor ovens where they bubble up and get golden.

As home cooks, having a Tandoor oven in our kitchen isn't overly practical.

However, a cast iron skillet, bbq plate or fry pan can give you a similar result.

How to Make Sourdough Naan

Sourdough naan is very simple to make. It involves a little kneading, a little resting and then shaping and cooking. But the hands on time is definitely worth it for this delicious bread!

You can mix this sourdough discard naan bread in the morning and enjoy fresh naan bread for dinner!

Here's how to make this sourdough naan recipe:

You can knead the dough by hand or you can knead it with a stand mixer. It's completely up to you and both methods of kneading works just as well.

Here are some Sourdough Naan tips to make sure you get the best possible naan bread!

Can You Use Sourdough Starter in Naan Bread?

This recipe uses sourdough starter in conjunction with baking powder as a leavening agent.

The baking powder ensures the naan bubble up as soon as they hit the hot skillet.

For this reason, you can use either active, fed starter or unfed discard. There are a few things you should note however.

Using an active, bubbly starter is recommended. It will ensure that your dough develops nicely and in a timely manner. It will also ensure that you get the best flavor for your sourdough naan.

If you use sourdough discard, the naan dough will take a lot longer during bulk fermentation. This will mean that you'll get a more sour flavor - remembering that the dough will also get some sourness from the yoghurt.

Because this naan bread contains no additional yeast, I do not recommend using your discard until your starter is doubling consistently (generally around two weeks to one month of age).

This sourdough naan recipe is really easy to shape. The dough, while slightly sticky, is really elastic and easy to handle.

You shouldn't need additional flour to handle or shape the dough - and it's better if you don't. Added flour will dry the dough out and give you tough naan bread.

Work out how many breads you want and divide the dough weight by that number. In this recipe, my dough balls are 68g in weight.

Divide the dough into equal pieces and shape each piece as a ball.

Then use your finger tips to flatten the ball into a rough oval. Keep stretching the dough with your fingers or use a rolling pin to finish off.

Sourdough Naan Bread is amazing on it's own - or as a simple side dish. But you can also add some delicious flavors to Naan Bread to take it to the next level.

Here are some suggestions for flavors to add to this sourdough naan recipe:

How To Use Sourdough Naan Bread

Here's a few ideas to get you inspired!

Can You Freeze Sourdough Naan Bread?

Freezing - Freeze leftover naan bread in a plastic ziploc bag. They will last for up to 3 months frozen. To use, place frozen sourdough naan bread into the microwave for one minute. They will come out soft and tender, just like when you made them.

Unused dough - If you find that you don't use all the Naan dough, you can store it in the fridge for up to 7 days. I have done this and just taken a piece out to cook as I've needed it. It does get quite a strong taste towards the end, but is still very enjoyable.

Sourdough Naan Bread is best used within a few hours of cooking. If you aren't going to use it all, freeze it as soon as possible as it doesn't stay fresh.

What is the difference between naan and flat bread?

Both naan and flat breads are traditionally leavened breads made with yeast, flour and salt. Naan bread however is usually made with milk, yoghurt and even eggs which give it a fluffier, softer texture. Flat bread does not usually contain dairy or eggs.

Yes, traditionally naan bread contains yeast to make it rise and bubble. It is traditionally made as a leavened bread which is what gives the bread it's signature bubbles.

No, naan dough, including sourdough naan dough, shouldn't be overly sticky. It can be slightly tacky but should not stick to your fingers. After the first rise, naan dough should be soft, elastic and pliable. If the dough is too sticky to handle, some olive oil on your hands can help to make it easier to shape.

If you're loving this sourdough naan recipe, you'll love these recipes too! 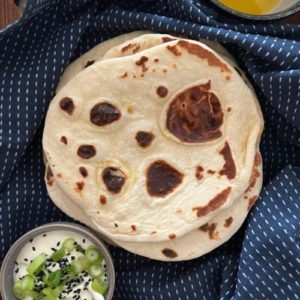 Notes on Sourdough Starter - Using an active, bubbly starter is recommended. It will ensure that your dough develops nicely and in a timely manner. It will also ensure that you get the best flavor for your sourdough naan. If you use sourdough discard, the naan dough will take a lot longer during bulk fermentation. This will mean that you'll get a more sour flavor - remembering that the dough will also get some sourness from the yoghurt. Because this naan bread contains no additional yeast, I do not recommend using your discard until your starter is doubling consistently (generally around two weeks to one month of age). Notes on Kneading - You can easily knead this dough by hand. If you'd prefer, kneading can also be done in a stand mixer or Thermomix. It will take around 3 to 6 minutes for the dough to become smooth and elastic. Notes on Bulk Fermentation -  You can use either active starter or discard for this recipe, however active, bubbly starter is recommended. Ideally, place your dough somewhere warm to ferment (you can find some ideas here). Notes on Cooking -  Ideally Sourdough Naan should be cooked on a cast iron skillet. I have successfully cooked them in a stainless steel frying pan with no issues, but you'll get the best results on cast iron. They also cook really well on a searing hot bbq or grill plate. This is the cast iron skillet I recommend.