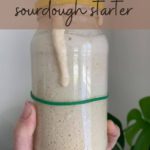 Sourdough starter can be a tricky beast to master - you are creating a microbial eco system and then manipulating it to bake bread. It's most definitely a very interesting and often challenging science experiment.

Like most things, there's always a reasoning behind why you should do things a certain way.

This article aims to explain the best time to use sourdough starter and why.

In this article I am talking about a mature sourdough starter that has been established over time and is ready to be used to bake sourdough.

Why Use Sourdough Starter At Its Peak?

A mature sourdough starter will reach its peak around 2 to 4 hours after being fed. If it's particularly cold, or you've given it a huge feeding ratio, this could be extended to 12 hours.

When you feed a sourdough starter, the yeast cells feed off the carbohydrates or sugars in the flour and turn them into carbon dioxide and ethanol. This is known as alcoholic fermentation.

Yeast cells reproduce during alcoholic fermentation and when your starter is at its peak, the yeast colony are also at their largest.

This is the best time to use sourdough starter because the large colony of yeast will then feed off the flour and water in your dough, again reproducing and producing carbon dioxide bubbles which fill the gluten matrix of your dough with gas. This is what rises your sourdough.

It's also why it's not a good idea to use a sleepy starter right from the refrigerator.

How To Time Your Starter's Peak

If you are not around after you feed it, you will miss its rise. You may only be witness to smears of starter on the sides of the jar - a tell tale sign that your starter has risen and fallen.

If you're handy with technology, a time lapse camera can be a fun way to watch your starter and see what happens when you're not there.

Alternatively, you can play around with feeding ratios. Feeding your starter larger amounts will slow down its rise.

If you are at home one day, this is a fun way to see how long it takes your starter to peak. This is invaluable information when creating a sourdough baking timeline.

Why Does A Starter Rise and Fall?

You might have noticed that your starter will rise and peak and then after a while it collapses.

Some starter don't collapse, or stay risen for a long period - and that's ok too.

As explained above, a starter rises when the yeast and lactic acid bacteria convert the sugars in the flour into carbon dioxide and ethanol. This gas is what makes sourdough starter rise. The gas bubbles are trapped inside the gluten network created by the proteins in the flour.

Eventually, the yeast and lactic acid bacteria will consume all the sugars in the flour and your starter will hit its peak. It may stay at peak for a little while as the yeast slow in their gas production.

Once they've consumed all the sugars in the jar, the yeast and lactic acid bacteria will be starving. The bacteria will start to break down the gluten network, allowing the gas to escape. This is what causes your starter to fall.

Hungry yeast will eventually produce hooch if you don't feed them.

A hungry starter will collapse. It may be more runny than when you first fed it and it can also start to smell like acetone if it's left hungry for a little too long.

What Makes A Sourdough Starter Stay At Peak for Longer?

The consistency of your sourdough starter will change the way it behaves.

A thicker sourdough starter will be mousse like when it peaks and will stay risen for longer. The gas escape will be slower for a thicker starter, allowing it to maintain its peak for longer. This type of starter is more likely to pass the float test than a wetter starter.

A thinner, runnier sourdough starter will peak faster but will not stay risen for long. It will collapse quite quickly.

If you are trying to make your sourdough starter stay at peak for longer it's best to maintain a thicker consistency as will hold its rise for a longer period.

Cooler temperatures will also prolong your starter's peak, so if you want it to be ready faster, keeping your sourdough starter warm is important.

Can I Use My Sourdough Starter Right After Feeding?

It's not a good idea to use a sourdough starter right after feeding. Ideally you should wait at least 2-4 hours.

When you first feed a sourdough starter, it's at its weakest point. It has not had time to consume the sugars in the flour and is flat and inactive.

After feeding, it will slowly come to life. In an active starter, bubbles will begin to appear just 10 minutes after feeding. They will become more and more prevalent as the yeast and bacteria feast until it begins to slowly rise and peak.

If you use a starter just after you've fed it, you will be using a very weak, diluted starter and then diluting it further by adding even more flour and water.

If it's a mature starter it will eventually rise your bread, but it would be extremely slow and you would probably find that the gluten network would start to bread down before it finished fermenting.

Why Does My Starter Smell Funny When I Don't Feed It?

If you neglect to feed your starter for a few days, you might find it starts to smell really bad.

Depending on how mature your starter is, it can vary from bad parmesan cheese to smelly feet or just really strong acetone or paint stripper.

Whatever the case, it's not a pleasant aroma.

Because your sourdough starter is a living culture of micro organisms, it needs to be fed regularly - particularly if it's kept on the kitchen counter.

If you don't feed your starter regularly, particularly once it's collapsed, you will allow the yeast and bacteria to starve. You also risk the bacteria being too weak to overcome the bad bacteria, like mold.

Do you stir sourdough starter before using it?

What does "fed" sourdough starter mean?

Fed sourdough starter refers to a starter that has been fed flour and water (preferably by weight). You should feed the starter equal or greater than its weight after discarding a portion. You should wait at least 2-4 hours or until the starter is at its peak before you use it in your baking.

Can you use sourdough starter after it falls?

Why is my sourdough starter not rising or falling?

There are many reasons a sourdough starter will not rise or fall. It may simply be immature and not ready rise yet. It may need to be fed with a different flour or simply given more time to develop. You can see my tips for boosting a sourdough starter here.

What's the best water to feed a sourdough starter with?

You want clean, unchlorinated water that has good mineral content. You want to avoid distilled and RO water. I've written a full guide to the best water for sourdough starter here.