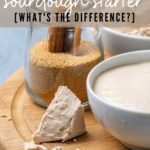 Sourdough starter and yeast are both leavening agents and both require a fermentation process. They are used to leaven breads, pizza, rolls, bagels etc. Other leavening agents can include baking soda, baking powder, eggs etc. These are more popular for quick breads like banana bread or pancakes.

So is there really a difference between commercial yeast and sourdough starter - they both make dough rise? So can they be used interchangeably without any issues?

Yeast, or commercial yeast as it is often referred to, is a specific strain of baker's yeast. It is different to nutritional yeast. Commercial yeast or cultured yeast refers to a fermentation agent that belongs to the saccharomyces cereviae family (this is very closely related to mushrooms believe it or not).

Commercial yeast is manufactured under specific conditions and is honed to make it rise bread quickly and easily. It has been chosen from 1500 species of yeast and manipulated to give a reliable result (nearly) every time.

Yeast feeds on sugars that convert this food source into carbon dioxide. You can even make alcohol with yeast if you give it enough time!

There are three main types of commercial yeast - these are instant, active dry and fresh yeast.

This type of yeast is often called rapid rise and is probably the most common type of yeast used by home bakers. It is quite fine and smaller granules mean that it can be put directly into your dough - you don't need to allow it to bloom first.

I use this type of yeast in my popular Easy Sourdough Discard Sandwich Loaf because it doesn't need to be activated first and can be thrown directly into the dough with no issues.

This type of yeast is a little grainier than instant yeast and requires to be activated in water or milk before it is used in a recipe.

It is better suited to longer fermentation processes and is good for recipes needing a double rise (like regular bread). It is good for use in bread machines as it can handle longer periods of proofing that may not be tolerated by instant yeast.

Also known as cake yeast, fresh yeast is sold in blocks that need to be kept in the fridge. It is not dehydrated like the two other types of yeast above. Fresh yeast is better suited to sweet breads and donuts, although it can be used for any type of bread, pizza or roll that requires yeast.

It is often favored by commercial baker's but is not as convenient for the home baker.

You can see photos of the 3 different types of commercial yeast below.

What is Sourdough Starter?

Sourdough starter looks more like a batter than a type of yeast. Where commercial yeast is generally in granulated form, sourdough starter is most commonly a liquid or batter (although it can be dehydrated and suspended).

It is characterised by mousse like bubbles that are often pressed against the glass jar it is kept in. You will notice many bakers use a rubber band to keep track of the activity of their sourdough culture.

Sourdough starter is essentially a "symbiotic colony of yeast and bacteria" or SCOBY. It is a living organism containing wild yeast that occurs in the air, in the flour you use and even on your hands! You can read all about where the yeast in sourdough starter comes from here.

Unlike baker's yeast, sourdough starter is naturally occurring and is a lot more volatile and unpredictable than its commercially produced counterpart.

And one of the main differences to commercial yeast, is that the yeast in your sourdough starter live in a symbiotic relationship with the lactic acid bacteria. The yeast continue to thrive in this acidic environment and as long as you get the timing right, they will make your dough rise.

While you can most definitely learn the rhythm of your sourdough starter, you may find that sometimes, it really does just do it's own thing!

How Is Yeast Different to Sourdough Starter?

The main differences between yeast and sourdough starter are the time in which they take to leaven bread.

Because of the way commercial yeast has been honed, it rises bread very quickly. In comparison, the wild yeast contained in sourdough starter can take many hours, even days, to rise bread.

But in this difference of timing, comes a difference of flavor. The time that the wild yeast in your sourdough starter take to rise your dough contribute to the complex flavor profile of sourdough bread.

What is the Difference Between Natural Yeast and Sourdough Starter?

Whether you maintain your sourdough starter on the counter at room temperature or in the fridge, it is still natural yeast. The flavor of the wild yeast may vary depending on how you store it and how you feed it (ie whether you use whole wheat flour or bread flour), as well as what temperature you keep it at. You'll find tips for making your homemade sourdough bread more sour or less sour here.

But regardless of all these factors, sourdough starter is natural yeast. A healthy starter will make your bread rise.

How Do You Make A Sourdough Starter

Sourdough starter is pretty easy to make and is a combination of simple ingredients. You basically need to combine equal amounts of flour and water over a period of several weeks until you establish a strong colony of wild yeast and lactic acid bacteria. You can find my easy instructions for making a sourdough starter here and sourdough bread recipe here.

Sounds simple, right? Well it is in theory, but there are many things that can go wrong. You're dealing with wild yeast after all! You can find a comprehensive sourdough troubleshooting guide here.

You could choose to feed your sourdough starter with rye flour, whole wheat flour, all purpose flour or even bread flour.

Is It Better To Use Yeast or Sourdough Starter?

There really is no definitive answer to this question. Whether you use yeast or sourdough starter really depends on what you are making and what resources you have available to you.

There are pros and cons to using baker's yeast and sourdough starter. For example, commercial yeast may be very fast to rise, which is great when you're pressed for time. But bread made with sourdough starter tastes so much better as it has a more complex flavor! So then it becomes a question of what is more important to you - taste or time?

I really don't want to convince you that one is better than the other. While I'm a huge advocate for baking sourdough - I also use commercial yeast regularly in my kitchen. I believe there's a time and place for both.

And in fact, in these uncertain times, it can be great to have both in your kitchen! A small sachet of dried sourdough starter can be a useful addition to any emergency kit. However, commercial baker's yeast can be purchased from grocery stores.

So after reading about the inconvenience of sourdough starter, why would you even bother using it?

You really can't beat the depth of flavor or the crackling, blistered crust of freshly baked sourdough bread. And have I mentioned the sense of pride you get when you lift the lid on that Dutch Oven?

There are also several health benefits to eating sourdough bread. Sourdough that has had a longer cold ferment has a reduced amount of gluten which may be better for people that have gluten intolerances.

And just look at the gorgeous open crumb that can be achieved with a healthy starter!

Can You Convert a Yeasted Recipe To Sourdough Starter?

So the big question, can you convert yeasted bread recipes to sourdough starter?

The things you need to look at when converting a yeasted recipe to a sourdough recipe are:

While sourdough starter is half water, it acts more like a liquid than a solid, so you will need to take that into account as well.

How Much Sourdough Starter To Use In A Yeasted Recipe?

If you do want to use sourdough starter in a yeasted bread recipe, you will generally need to use a formula to convert it.

Here are the steps to convert a yeasted recipe to using sourdough starter for leavening:

Can You Use Sourdough Starter and Yeast?

Some examples of recipes that utilise baker's yeast alongside sourdough starter are:

Is sourdough starter better than yeast?

Can you use sourdough starter instead of fresh yeast?

Can you make sourdough without a starter?

No - if you make bread without a starter, you'd be using some kind of commercial yeast for the leavening. This means that is would be regular bread or yeasted bread, as opposed to sourdough bread. Even if you use Greek yoghurt or sour cream in the recipe to give it a "sour" flavor or tang, it still won't be sourdough. Sourdough refers to the making of bread with a sourdough starter.

What happens if you add yeast to a sourdough starter?

If you add commercial yeast to your sourdough starter, you have then added a specific strain of yeast to your starter. This specific strain of baker's yeast will more than likely colonise faster than the wild yeast you are trying establish. Over time, wild yeast will take up residence, but due to the presence of the commercial yeast strain, it will not be a true sourdough starter.

How can I strengthen a weak sourdough starter?

If you have enjoyed learning about the differences between commercial yeast and sourdough starter, you might also enjoy these articles:

« Quick Sourdough Discard Pizza Dough [no yeast]
What Is The Difference Between A Poolish And Levain? »