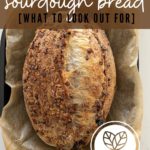 Traditional sourdough bread made from 3 simple ingredients (flour, water and salt) is vegan and free from animal products.

However, there are a number of things you need to look out for, particularly when buying sourdough bread from the grocery store or bakery. Some types of sourdough bread can contain non-vegan ingredients, not suitable for a vegan diet.

When looking for vegan sourdough bread, you should look out for the following things:

Please note this post is general information only and cannot be taken as medical advice. If you have a medical condition or are wanting to change your diet, please seek professional advice.

Types of starter culture such as Pasta Madre are often fed with honey and so are best avoided if you are following a vegan based diet.

Are The Ingredients In Sourdough Bread Vegan?

If you are making or purchasing traditionally baked sourdough bread that is made using just flour, water and salt (and a vegan sourdough starter) then you can be sure that this sourdough is vegan friendly. The natural yeasts in sourdough bread are considered vegan and safe for a plant based diet.

However, unless you've baked the sourdough yourself, you must look out for additional ingredients that may not be suitable for a vegan diet. This can be particularly important if you are purchasing your sourdough bread from a local bakery or grocery store.

Sourdough ingredients that are not considered vegan:

None of these ingredients should be included in vegan bread.

They are not always included in sourdough recipes, however, if you are venturing beyond simple sourdough using basic ingredients and looking at sourdough breads like sandwich bread, hamburger rolls, challah, brioche etc then they can be a common addition to these recipes and ones you will want to avoid. That is unless you are making them yourself with a vegan alternative (you can find some of these further down the page).

Soy Based Ingredients ... But Not Always

There are a few ingredients often used in bread, particularly grocery store bread, that cannot be relied upon to be vegan, unless the sourdough has been labelled as "certified vegan". They are fairly common ingredients you may want to look out for.

Monoglycerides, diglycerides and lecithin are often made using soybeans, but not always. Lecithin in particular can be derived from egg yolks, so it's important to do your homework when purchasing sourdough bread that is vegan.

Monoglycerides and diglycerides are often included in store-bought sourdough bread to improve the texture of the bread and retain moisture. You may not know you're even eating them when buying store bought bread, unless you read the label carefully. And even then, you won't know if they are plant-based ingredients or not, so they are best avoided where possible.

Is Sourdough Bread Suitable for a Plant Based Diet?

While sourdough bread made from bread flour or all purpose flour is not considered a whole food because it's still a refined carbohydrate, the long fermentation process make it much better for you than regular white bread.

Fermented sourdough bread made without commercial yeast has a myriad of health benefits and is suitable for a plant-based diet. The lactic acid bacteria lower the phytic acid in the bread, ensuring that the nutrients are more bio available to our bodies. It is also lower in gluten than regular bread. You can read about the calories in sourdough bread here.

Whole grain bread and sourdough made with whole grain or whole wheat flour is an even better choice and would be considered a healthy option on a plant-based diet, such as vegan.

What Type of Sourdough Bread is Vegan?

While there are many things you need to look out for, including the ingredient list, these types of sourdough bread are almost always suitable for vegans (you will need to make your own decision and check ingredient listings though).

If you are following a vegan diet, but want to venture beyond a simple sourdough bread recipe, then you may like to try these ideas:

If you are following a vegan diet, you will need to look for vegan ingredient substitutions for your sourdough baking to ensure you can produce a vegan version of your favorite sourdough bread.

You might find the following chart helpful in substituting regular ingredients for animal-free alternatives:

What Is Enriched Sourdough Bread And Is It Vegan?

Common types of enriched sourdough bread include soft sandwich breads, hamburger rolls, brioche loaves and buns and challah. If you are purchasing these types of bread, you'll need to pay particular attention to the ingredients list and check all food labels.

The good news is that you can make these different types of bread at home using common vegan alternatives.

For example, this soft sourdough sandwich loaf can be made using vegan butter or olive oil instead of real butter and a plant based milk instead of dairy milk.

Allergy information and allergy labels are an easy way to quickly identify whether sourdough bread contains dairy and or eggs. Of course you should still check the ingredient list, but prominent allergy labelling can be helpful if you are following a vegan diet and wanting to avoid dairy and egg products.

Allergy labelling won't always show whether the bread contains honey, royal jelly or other animal derived ingredients though, so it should not be fully relied upon.

What Questions Should I Ask When Buying Vegan Sourdough Bread?

Can I use vegan butter in enriched sourdough breads?

Is sourdough bread considered a refined carbohydrate, even though it's a fermented food?

Yes, sourdough bread made with white flour (all purpose flour or bread flour) is considered a refined carbohydrate, despite the fact that it is fermented.