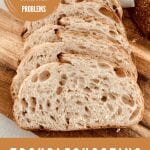 The good news is, there's always a way to fix your sourdough bread problems for your next bake!

Sourdough baking is a never ending journey of learning - and that's what makes troubleshooting it so damn interesting!

Sourdough bread problems are often multi faceted and you will find that they are not always caused by one issue.

For example a gummy crumb can be caused by a starter that's too young and or under fermented dough.

A lack of oven spring could be due to a shaping issue, under fermentation or poor gluten development - but more often than not it's a combination of a few things.

If you're looking for troubleshooting your sourdough starter - you'll find a list of the most FAQ here.

Why Is My Sourdough Bread Gummy?

The bread is heavy, hasn't puffed up in the oven and has a moist, dense texture inside.

CAUSE - gummy sourdough can be caused by a starter that's too young or inactive and or under fermentation.

More often than not, gumminess is a result of under fermentation (cutting the bulk fermentation time too short).

There are generally two causes of this (it can be a combination of both):

SOLUTIONS - Depending on which of the above has caused your gumminess, you can fix by:

My Dough Spreads When I Flip It Out of the Banneton

PROBLEM - Your bread dough spreads and loses shape when you flip it out of the banneton to bake.

CAUSE - Spreading can be caused by a few factors including under fermented or over fermented dough as well as poor shaping technique.

SOLUTION - Depending on the cause of your spread, you can implement the following fixes:

My Dough Splits Other Than Where I've Scored It

PROBLEM - Dough splits in places other than where you've scored or even splits messing up your decorative scoring. This is a one of the most frustrating sourdough bread problems to have.

CAUSE - This most likely caused by under fermentation, but can sometimes be a shaping issue too.

SOLUTIONS - These are the things you can do to try to avoid your dough splitting naturally:

My Bread Has a Very Uneven Crumb

PROBLEM - your sourdough bread has an uneven crumb. More often than not a tight crumb with a number of larger holes - but it's not even or open. It can also be called Fool's Crumb where the bread appears to have an "open crumb" however the holes are large and surrounded by an uneven, tight crumb that is not desirable.

CAUSE - a tight and or uneven crumb is generally caused by under fermentation, but can also be due to not having a mature or active starter.

SOLUTION - The solution to this problem is to ensure that your dough is fermented correctly.

Sourdough Deflates When I Score It

PROBLEM - Sourdough bread dough deflates (like a balloon)when removed from the banneton and scored.

CAUSE - the dough has been over fermented and/or over proofed and has too much air trapped in the shaped dough. When the lame scores the dough, the air escapes causing the dough to collapse. The gluten structure has become weak and is unable to hold up.

SOLUTION - reduce proofing time. Also check the temperature of your fridge to ensure it's 4C or under. It's possible that the dough is rising too much during the cold retard which will also cause this issue.

I've written a full guide to why sourdough deflates after scoring here.

My Sourdough Has a Cone Shape Rather Than a Round Shape

PROBLEM - My sourdough bread has an unusual cone shape after baking. It's wider on the bottom and almost pointy at the top, rather than having a rounded shape.

CAUSE - This odd shape is caused by under fermentation. The yeast has too much energy when it hits the oven and this excess energy causes a "rush" when your dough hits the oven.

SOLUTION - extend your bulk fermentation to enable the yeast in your dough to release some of their energy before hitting the oven. It really is a delicate balance to ensure that the yeast have consumed enough of their food to produce those beautiful pockets of air - but not too much so they can still provide oven spring at baking time.

Why Does My Sourdough Bread Feel Wet When I Cut It?

PROBLEM - My sourdough feels moist or wet inside, even though it's well fermented.

CAUSE - cutting into your bread too soon! Sourdough can take up to 24 hours to fully cool and come to room temperature.

Yes you read that right! Sourdough made with bread flour can take up to 6 hours to cool properly. If your bread contains rye, it can take up to 24 hours!

SOLUTION - Allow your bread to cool for AT LEAST 90 minutes (much longer for rye bread).

Sourdough does not stop cooking when you take it out of the oven. The steam that is trapped inside needs to move towards the outside. It's not until all of this steam has escaped that your bread actually finishes cooking.

Cutting it too soon stops your sourdough from completing the cooking process and results in a gummy, wet texture when you cut it.

A tell tale sign that you haven't let your bread cool properly is having a "sticky" knife when you remove it from your bread. This is because of the moisture that remains in your sourdough.

Let your sourdough bread come to room temperature before you cut into it.

Why Didn't My Sourdough Puff Up In The Oven?

PROBLEM - My sourdough never puffs up in the oven. I am constantly baking hockey pucks!

CAUSE - Your sourdough is lacking oven spring, which means your dough is not growing in the oven as it should. It can be caused by over fermenting or under fermenting your dough, but also by other things like shaping issues.

SOLUTION - Lack of oven spring can be a complex problem. I've written about 6 things you can do to ensure you get good sourdough oven spring (and leave the hockey pucks behind) here.

Generally, flat loaves will still taste ok, they just lack that beautiful airiness we want to see in our sourdough.

My Sourdough Has Tunnels of Air ... What Happened?

PROBLEM - You may have baked a loaf of sourdough which appears to have large tunnels of air or just one big hole surrounded by a tighter or dense crumb.

CAUSE - This is typically caused by under fermenting your dough, but can also happen through using too much flour when you shape your bread.

SOLUTION - Tunnels can have a few solutions:

My Sourdough Isn't Cooked Through

PROBLEM - My sourdough isn't cooked all the way through.

CAUSE - Logically, the cause of this is not baking your bread for long enough. However under fermented dough will not cook all the way through, so this sourdough bread problem can have a deeper cause.

Why Is My Crust Pale?

PROBLEM - Pale crust hasn't browned. It can be leathery rather than crispy.

CAUSE - There are a few reasons your crust is too pale.

Why Is The Base of My Bread So Thick and Chewy?

PROBLEM - Base of my sourdough bread is thick and chewy. Often the bottom of your sourdough is burning.

My Sourdough Bread Collapsed Once It Cooled - What Happened?

PROBLEM - My sourdough looked great when I removed it from the oven - it was crusty! But as it cooled, the crust wrinkled and collapsed ... what happened?

CAUSES - There are number of causes here, but the main one is that it was not baked long enough for the moisture in the dough to be baked out of the bread.

I hope this guide helps you to troubleshoot your sourdough bread problems and ultimately bake a better loaf!

If you're not sure about some of the terms used in this article, you might find this sourdough glossary helpful.