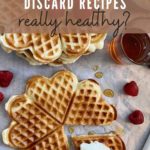 The truth is sourdough discard is still nutritious and beneficial when compared to actual sourdough starter, however there are situations where true sourdough may be a better option.

This article will explore whether sourdough discard recipes are really good for you, as well as whether discard has the true sourdough benefits of fermentation.

What Is The Difference Between Sourdough Discard and Starter?

Discard is the portion of starter removed from the jar prior to feeding. Starter refers to the active starter that has been fed and has risen to a peak.

Both come from the same jar and are fed flour and water at some point, the differences are really in the timing.

You can read more about why discarding is essential to developing a thriving starter here.

Why Use Sourdough Discard?

Sourdough discard is utilised to reduce food waste. You can of course throw it away (hence the name discard).

But most people prefer to utilise the discard in some way.

If the discard is added to a recipe and has no fermentation time beyond this, it is solely a flavoring. In this way, it is often used with a leavening agent like commercial yeast or baking powder.

You can see the differences in the uses of discard below:

UNFERMENTED FLOUR - discard can be added to recipes solely for flavoring - there is no fermentation here. Leavening agents such as baking powder and commercial yeast are often added (but not always). Recipes that use discard for flavor only and have unfermented flour are:

NO EXTRA FLOUR - discard can be used in recipes without extra flour added. This means that the fermentation has already occurred in the starter. Examples of this would be making pancakes or crepes without adding any extra flour to the discard at all or sourdough granola where it is used as a binding agent. Other examples include:

CHOICE OF NO FERMENT OR LONG FERMENT - There are some recipes which can be made without fermenting the flour, but you can leave them overnight for added sourdough fermentation benefits. Some of these recipes include:

These types of recipes can taste so much better if you do allow the discard to ferment the flour - but it's not essential!

How To Use Discarded Sourdough Starter

You can use discarded sourdough starter in any recipe that has flour and water added (for the most part).

You need to remember that sourdough discard will behave mostly like a liquid though, so you'll need to be strategic with how you add it to recipes. It can make things too runny if you add to much and it will change the way in which certain recipe bake.

You could use it to thicken a sauce like gravy or bechamel, add a sour note to some banana muffins or even make the most delicious gingerbread cookies you've ever tasted!

As a general rule, you can use discard to replace part of the flour and water in your recipe (this is how recipes for sourdough muffins, quick breads, banana breads etc have been created).

The difference is in the way it is used.

If you are adding sourdough discard to sweetened baked goods such as cinnamon rolls, sweet iced buns and muffins, you would still be consuming unfermented flour, sugar and other additives.

These recipes do not use sourdough discard for leavening so there is no further fermentation. Generally the leavening in these recipes comes from commercial yeast, baking powder or soda etc.

Using sourdough discard in longer fermented recipes would still give you the same benefits as baked sourdough bread, however you would still need to take into consideration the sugar, salt etc added, just like any other baked goods.

While sourdough discard is nutritious, it is generally not as nutritious as making a true sourdough bread, which has many health benefits including:

You can read more about the benefits of sourdough bread here.

This is a bit of a tricky question, however the short answer would be no.

If you are gluten sensitive, you are not allergic to gluten (like celiacs), but it may irritate your digestive system.

If you can tolerate sourdough bread, this may be because the bacteria and phytic acid in the sourdough starter have started to break down the gluten and flour before you actually eat it. Sourdough bread is generally classed as "low gluten" (not gluten free) so long as it's been fermented for an extended period of time.

This may not be the case with sourdough discard recipes.

If you are making a "no wait" sourdough discard recipe where there is no fermentation once all of the ingredients are added, you will more than likely find that it will not be tolerated by a gluten sensitive person.